Ahh, the Trident vote.  Always a time of great unity in the UK.  I have witnessed one or two of these now, and the same things come up every time.  Oddly enough, nobody wants to discuss the kill zone, which will become relevant when the UK finally annoys another country enough for them to want to knock out our nuclear deterrent, or when we have an accident causing it to go off, and disturb the variety of detritus left by our crappy English boyfriend that just won’t go away. 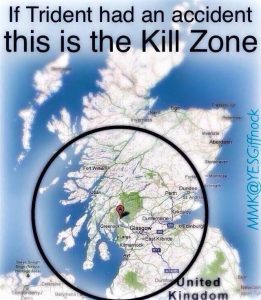 He keeps saying that he will change, but we know he won’t.  He hates the homeless, he hates the disabled, he thinks pensions are a waste of money better spent on more weapons.  We disagree on so many things.  Sigh.

Meanwhile, he thinks it is perfectly OK to use our stuff, and that we will not mind living on a ramshackle island, not talking to anyone and that we see no problem in living with his collection of guns and explosives.

All we want to do is a bit of travelling, maybe learn a language, chat to our neighbours but no.  We are supposed to sit in a grim flat, where we live with people we apparently have nothing in common with and put up with never being mentioned unless he is complaining about us.  This relationship SUCKS. It is time we discovered our self-worth and went out and found somebody better.

Seriously, my great grandparents were extremely radical on right and left, my grandparents lives were ruined by WW1, as a result my father was a very serious ideological pacifist.

I am, unfortunately a bit of a rebel and he took great care in ensuring that my priority was free thinking.  I can see the Conservative reasoning, particularly at this delicate time.

It is a message to the rest of the world that Britain is a strong and successful country, confident enough to vote for this expense when we have just voted for Brexit.
If we are foolish enough to run around with the USA, we need to protect ourselves in the event of a country or countries wishing to take out America’s foremost ally.
It is a bit like paying tribute to ensure America’s continued good wishes.
It ensures that we are still considered a world power. Very important considering our future trading partners, provided my conservative readers are sufficiently plugged in to understand what I and others have said re the Brexit trading opportunities.
In the event that America actually go right ahead and start actually using swastikas, we need to be able to protect ourselves from them.
Those precious little workers on Tyneside need a living. One of them just suggested to me on Twitter that pensions were a waste of money in comparison with gigantic weapons.  I presume that he is very young.
Who gives a shit about 80 percent of the Scottish population anyway?

No amount of entreaties or arguments would have changed the vote.  The indoctrination continues as I write, with Kevin McGuire and Harriet whatever-her-name-is-tory ranting about anything but Scotland on Sky.  So, you can take it from this that even Murdoch has jumped on the Scotland crushing bandwagon.  It is now imperative to learn how to out-move the media, and learn extremely fast.

We in Scotland are more interested in ground warfare than big threats.  We are notable worldwide for sending unusually clever soldiers who avoid wasting bullets when we can find other ways of doing things, and we produce exceptionally brave warriors. There is no reason why we cannot apply our spirit, our confidence, and our cunning to this increasingly nasty cultural warfare.

As for Theresa May saying she would press the button.  Yes, of course she would.  As Lord West said this afternoon, do you prefer dying knowing that someone out there is killing people, or that a ‘bastard like him’ is stopping them in their tracks? Japan, in particular has great respect for the UK as a small and extremely scary nation.  If you consider Trident from this perspective, then it looks pretty sensible.

My only hope currently, is that what is left of the UK see sense and draw up a trading agreement which does not allow CETA or TTIP, to reject fracking, since we are all aware of the massive oil strike off our coast that the UK chooses to not tell anyone about, and to be aware, that once the inevitable happens and the GMO experiments turn into chemical disasters, that we would be far better, as an island, to take some advice and revive what was once the greatest agronomy in the world, instead of blowing our money on submarines that we do not actually use.

There Is No Escaping Destiny Boris

The Systemic problem with the EU in the UK