Social Conditioning is a bitch, ain’t it? 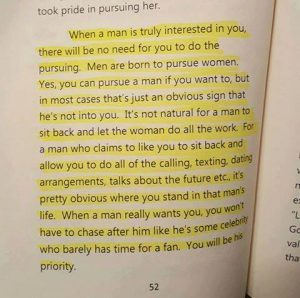 Someone on Facebook actually wrote this into their book.  I presume they are American.  I am sure it is relevant to a macho culture, where women are still expected to spend the equivalent of a small car on looking pretty so that some big hairy bloke pays for a date, but it is not terribly relevant in my country, where the women were expected to fight off English soldiers at home whilst the men ran for the hills to plan the counter attacks.
You can imagine that your social conditioning has some relevance in nature, but it would not be true.  Women are just as capable of doing the running as men are.  Some women prefer it.  Some men prefer it.  Some people don’t actually want to be together at all, and prefer to remain in a stalemate situation forever.
It depends on what you want.  I was in very responsible positions from a fairly early age, so men became relatively minor figures.  A good kitchen runs a bit like a beehive, so you get used to several of them running about at your feet.  Whilst I freely admit that men are often confused when you openly do the chasing, regardless of anything else that is going on, it is absolutely not true to say that all men hate a straight talker.  A small majority prefer it, unless it involves faintly embarrassing social situations, like explaining their existing girlfriend.
What is annoying is the time they expect you to spend waiting to find out whilst they struggle with the new concept.  Women just don’t have the time to waste.
The situation I have now, which is perfect for me, and advantageous for Wolfe, since it comprises of a form of ‘showmance’ which does not need to actually go anywhere, generating some entertainment in the course of producing permanent work, is partially as a result of my not wanting what Wolfe traditionally goes for.
He is probably aware of this, but confused about my methodology and the time I am spending on it.  This does not matter, since I have no intention of doing any actual chasing in person.  If he makes up his mind that he believes me to be superior to an entire harem of willing supplicants, that is his decision.  (Probably a stupid decision, but clearly I do not think so.) I am certainly not planning on doing any begging, demanding or requesting. Real people are a different kettle of fish to passing ships in the sea, and there is a necessary requirement for tolerance, understanding and fluctuations in emotional state.  That is Ina’s entire raison d’etre.
I have experienced men with hang-ups about being objectified in the past.  This is laughable, since if asked they will always say they love being objectified.  Many, if they actually experience it, are so shocked that they assume that there is something wrong with you doing exactly what they do on a daily basis.  Eye them up, attract their attention, ask.  What is so freakish about that? If we all broke the rules, rather than manipulating some unwitting dude into doing the asking just to follow a rule we never agreed to, then the problem would not exist.
So, I was less than impressed by this person’s idea of ‘the rules.’  There aren’t any, end of story.  If you agree to be a little woman, expect to be treated like one.  It may be fun in the sack, now and again, but I can assure you that men run out of imagination a long time before you do.  Better to be a wild and dangerous filly, than a placid mare.
So, next time you see some quiet lonely man, especially the ones your friends laugh at your looking at, try being a bit more assertive.  Winkle out the information you require to make the move.  You might win, you might not, but it is better than agreeing to a social contract that you did not participate in constructing.
The post Social Conditioning is a bitch, ain’t it? appeared first on Ina Disguise – Author

Inflate your own importance